Everybody wants download statistics. Whether Mozilla, OpenOffice.org, openSUSE or whatever large project is concerned, the knowledge about download counts is instrumental for development coordination. Here's how it could be done.

Note: See ''Feedback'' at the end of this document for how to get in touch!

This is often approached by writing scripts that surf log files. That has a few shortcomings in that it

There must be better ways. Below, I'll sketch what I think could be the download statistics master plan. I'll first describe a specialized Apache logging module named mod_stats, an existing implementation. Then I'll show how the concept should be generalized, so it becomes useful for everybody wanting to count downloads.

The first sketch fitted on four postcards. Of course, the devil is in the details. 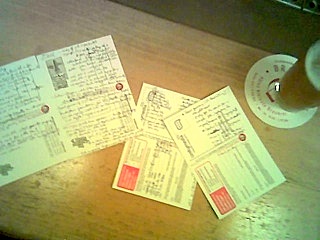 So, first some general considerations.

These means provide a lot of detail for analysis, but don't make it easy for the data to aggregated.

In 2007, I implemented a logging module for the openSUSE build service called mod_stats to overcome these difficulties. Since MirrorBrain sits in the middle of the infrastructure and gets all requests before they are farmed out to mirrors, it is a natural place to count downloads. (This was one of the design choices of MirrorBrain.) mod_stats counts downloaded packages in realtime into a database.

It hooks into the logging phase of Apache's request processing, when the request is already handled, so nothing else has to wait for it. (It is extremely lean anyway, and I repeatedly looked hard at the database process status and hardly ever managed to see an ongoing request.) Measurements confirmed that this scheme is highly scalable.

Still, the existing implementation has the drawback that it groks only URLs of the openSUSE Build Service, which it was written originally.

The idea is to make this module more general, which brings us to the:

The basic concept would be to map pathnames to ''products'' by regular expressions. The logging would count the downloads per products. Such a map could look like this (simplified, and not necessarily a working) example:

The matching rules could be simplified (and automated) much by using advanced regular expression syntax to backreference the matches. That'll be a little more complex, depending on how comfortable you are with regular expressions, but has the advantage that it'll automatically match downloads added in the future:

Moreover, we could do the following:

A possible query is:

The table could contain further fields: language, mirror, client country. It could be further compacted by leaving out the year and logging only the day (number since 1970).

The essential things were implemented in the end of 2009. mod_stats, an Apache module to count in realtime, hasn't been updated yet. However, there is a script that can be used to parse the logs once per day. It seems to work nicely, and powers http://marketing.openoffice.org/marketing_bouncer.html since February 2010.

Reports are generated with a Django web application: http://download.services.openoffice.org/stats/csv/20100102.csv (Note that this URL can be slow, because the server is quite slow virtual machine)

Update 2012: The Document Foundation uses the same script, since about 1.5 years now.

Update 2014: From the LibreOffice team, I hear that the a posteriori log parsing with the script takes too long when they run it after a longer time. For instance, over the logs of a whole month. With such an amount of logfiles, the script needs a day to complete, which is not really fun. I remember that with vast log files it was better to run the script daily (then it's not so annoying when it might take up to an hour or so. They tell me that attempts to improve performance have failed, so that they considered implementing a download counter that counts "live" -- ...which is exactly what mod_stats originally did!

So the current status is:

Other than that, I think it would be good to integrate the code into the MirrorBrain source tree, so it's easier accessible and easier to deploy once ready to use. [DONE]

The existing mod_stats at github repository (previously: svn repository) should be able to serve as a good basis. What's missing is

Interesting implications are (besides the general potenfial of a collaboration, that it can spark and enable the development of better and more versatile solutions):

( https://korg.wiki.kernel.org/index.php/Gsoc2010:ideas#.2B.2B_Centralized_statistics_gathering whatwas the outcome of this? )